Manokwari, West Papua, – Since the morning thousands of Manokwari City residents livened up the West Papua Peaceful declaration to agree to maintain and uphold peace in West Papua Province within the Unity and Unity of the Unitary Republic of Indonesia (NKRI).

The petition ‘The Declaration of Peace in West Papua was read by the Speaker of the West Papua Parliament Pieters Kondjol with the Governor of West Papua Dominggus Mandacan, XVIII Regional Military Commander Kasuari Maj. elements in the ‘West Papua Peace Declaration’ held by the Manokwari Borarsi field, Wednesday (10/9) The declaration of ‘West Papua Peace’, which began with a leisurely walk around 08.00 East Indonesian Time, took the starting point from the printing road to the Manokwari Borarsi field, followed by thousands of Manokwari residents, tribes in West Papua and the archipelago using their respective traditional clothes. Thousands of community members from various elements of the Manokwari agency who spilled over into the boreal field, were also entertained by the presence of the people who sang.

Following are the points of the declaration:
1. Declaring Peace throughout the Province of West Papua.
2. Faithful to Pancasila, the 1945 Constitution and the Unitary State of the Republic of Indonesia
3. Maintaining and Caring for Unity in Diversity “We Are All Brothers, Mutual Respect and Respect and Protect Fellow Children
4. Peace in West Papua Peace in Manokwari.

The Peace Declration was also filled with the hopes and appeals of Governor Dominggus Mandacan to keep West Papua and Manowari as ‘our common home’ and continued with the signing of the West Papua Peace petition and ending the interfaith prayer reading in the hope of Papua Peace The West is maintained in the Unity and Unity of the Republic of Indonesia frame of view. (Monti) 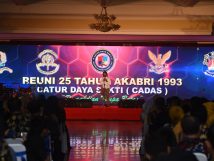